The RKS+ system can be operated as a stand-alone smart grid system. Load and voltage measured values can be transmitted from the control system via an IEC 60870 interface and loads and generators can be dynamically controlled with the load controller. Thanks to its diverse interfaces, the RKS+ can also communicate seamlessly with other third-party systems.

The load control software offers a large number of possible interfaces to the individual components of the entire smart metering system. The operating status (installed/in stock/removed) of a load switching device as well as the group assignment of the individual relays can be read in by an asset management system and automatically transmitted to the load switching devices. An existing network control system can be integrated via the IEC 61870-5-104 protocol.

More security through authentication and encryption

In a control system, it is important to ensure the authenticity and integrity of the communicated data. This ensures that a load switching device is trustworthy and that the control command really comes from the RKS+. Each message is therefore authenticated and encrypted with AES-GCM encryption using symmetric 256bit keys.

The RKS+ system offers the following additional functions and possibilities:

Further information is available in the RKS+ brochure. 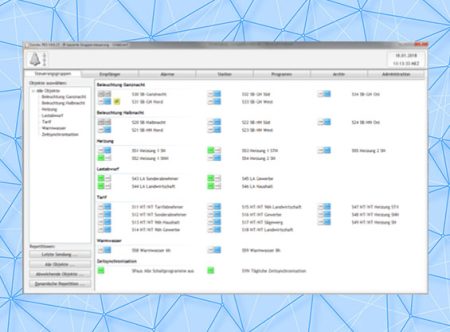 Subscribe to our Swistec Newsletter and we will keep you up to date.